For Police Killings, scroll down to 4.
The data & reference for the following 9 charts is at the bottom of the page.
1. Propensity (per million) to Murder:

55.38 per every million of AA people, killed an AA person.

• The police killed 2.3 X as many White suspects, as they killed AA/B suspects, for an equal number of violent encounters.

This is taking into account, each races' number of violent or aggressive encounters with police. (i.e. Resistance to arrest)

We can gauge each races' relative propensity to have a violent encounter with the police by looking at the number of convicted murderers, in that year, for each race group.

There were 3196 White murderers and, a similar number, 3156, Black murderers convicted in 2016. Therefore, because 574 White aggressors were killed by the police in 2016, we would expect to find that about 574 Black aggressors would have also been killed.

However, in fact, only 266 Black aggressors were killed.
That multiple is 2.25 less than White people. 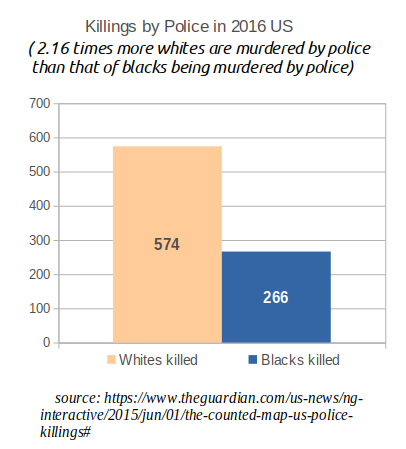 Findings:
• White people are killed 2.16 X as often by police, than AA/B people are.

That is substantially disproportionate, because the police have to attend to a similar number of incidents from each race group.
(despite the AA/B pop. group representing only about 14% of the pop.) 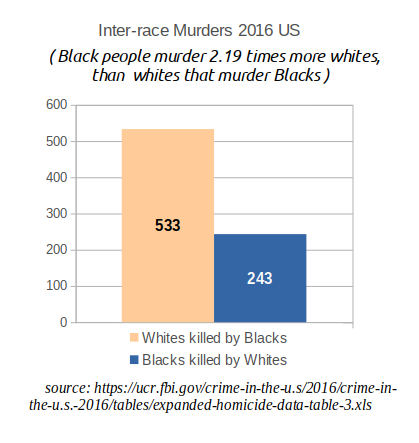 Findings:
• AA/B people killed 2.2 X as many White people, as the number of whites that killed AA/B's.

The figures 533 and 243 can be compared directly and 'should'  in fairness be equal to each other**, irrespective of the population % proportion split. If both races were equally violent, then the ratio would be exactly one. (1)

Below are two illustrative examples in order to prove why Interracial Murder figures ‘should’, in fairness, be equal to each other: